The balance between a warm yet projecting tone and a punch to its sound is what you get with a Tony Morison. Focusing on clarity and warmth of a Spanish guitar, which allows for a singing melody while delivering the projection of a lattice bracing, enabling the sound to travel and sustain further and wider are two unique qualities of a Tony Morison Guitar. The balance between these two qualities provides a solid foundation to any musician. Leading up to my first year of Studying at the University of New South Wales, I sought after a Concert model guitar and after trying many different makers, I played a Tony Morison and had an instant connection with his guitar. Tony Morison Guitars are truly beautiful instruments which evoke new discoveries of musical possibilities.

“Having recently graduated from the Sydney Conservatorium of Music, I was looking for a high-level concert guitar, however, I was torn as to whether to pursue lattice-braced guitars or those of the more traditional make. I have always loved the “singing” quality of the trebles of traditional guitars, but the projection, particularly in the bass, of lattice-braced instruments. When I first tried a number of Tony’s guitars, it became evident that these two qualities that I loved so much were combined wonderfully, and extremely well balanced. It was this that first drew me to his guitars, and it soon became clear that I had found what I was looking for.

I believe that Tony’s experience as a player is an invaluable asset to his lutherie, as it means he is able to consider his instruments from the perspective of both a performer and a luthier. This was particularly useful for somebody like myself whose knowledge of guitar construction is very limited. Despite the barrier of my knowledge, we were always on the same page and any doubts I may have had about the process were quickly put at ease.

For these reasons, I couldn’t be happier with the instrument that Tony has built for me. The end result is something that I am confident will serve me extremely well for a number of years of my professional career. I am a very proud owner of one of Tony’s guitars.”

“I just bought the concert guitar Tony Morison n°26 and I am very happy. I choosed her among 12 different concert guitars from Australia, Germany, Canada, France, because she has the power of a lattice modern guitar and the sound of a traditional spanish guitar. The sound is well-balanced, you can make sing the trebles as you want and the basses are precise and strong. I feel good while playing because the sizes are perfect to me. And in addition, she is beautiful!” 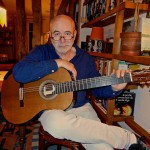 Yves with his guitar

After playing one of my guitars during my 2012 visit to Los Angeles, Vasil Chekardzhikov of Triada Trio kindly offered the following comment;

” The guitar has a very fresh beautiful and light sound, that is very responsive to the emotion of the player. Designed with great precision and love this instrument would serve well in the hands of any concert guitar artist at an international level” – Vasil Chekardzhikov

After purchasing one of my guitars James Newbold provided the following testimonial;

” Out of the many guitars I had played and considered, Tony Morison’s guitar was the finest of all. Before I touched it the exotic timbers were already appealing. Once I started playing however, it became evident that the timbers were chosen based on their quality of sound. Each note is crisp, and chords sound clean, but with depth. The guitar has amazing projection as well, and a depth in sound that I am still exploring, I often find new directions I can go with the instrument, opening up and expanding my playing. It is not always that a guitarist is so satisfied with their new instrument that they would be proud to own it forever.”

“Tony’s latest lattice model is a killer! For those that like some aspects of lattice instruments, string separation, clarity, balance, etc, but desire more traditional tone colour, this guitar has all of the above in spades! Five stars.”

Alison Skarratt purchased one of my guitars and provided the following comment;

“I have absolutely fallen in love with my Tony Morison classical guitar ….. such a beautiful and individual creation that sounds and feels as lovely as it looks. After playing many very nice guitars, I kept coming back to its warm, responsive, even tone, the colour and volume in its bass and its ease of playing. It has a complexity of character that I am continuing to discover and feel very lucky to own such an instrument. Thank you Tony!”

“Tony is a very accomplished luthier whose guitars I have been selling for several years.

As a player, performer and teacher of classical guitar over many years I appreciate the qualities of a premium instrument. Tonal range, clarity and voice separation, balance across the fingerboard, projection, comfort of playing, aesthetic beauty – these are all the marks of these wonderful instruments. Then there is that undefinable internal pleasure that comes from playing such instruments.

The guitars of Tony’s that I have played have a consistently high standard and reflect the qualities I describe – his guitars are exceptionally  fine.”

Trilogy Guitars in Los Angeles said of my most recent guitar on sale with them;

This guitar is a powerhouse. It has enough power for any level student and any concert level performance. It will definitely cut through in a setting where usually guitars are drowned out by other instruments. With this great power, it does not lack in character. The trebles have great clarity and smoothness that is complimented by a rich, round bass. A guitar of this quality does not usually come around at such an affordable price. Serious players and collectors alike would love this instrument.

Tony Morison is a talented australian luthier and a wonderful discovery for all the classical guitar lovers: his classical guitars are unique with a strong lattice inspiration but with a traditionnal sense musicality. A surprising result  : a  classical guitar with a huge and balance projection.